Lessons from Pachamama – The Second Gift

“When the Self emerges, the ego takes a hit”

I knew before the trip that the Achuar interpret their dreams at four a.m. and we would be invited to join them. What I did not know was that we would face this same treacherous jungle trail –only this time, it would be in the dark and in a downpour .

We retired early the night before in anticipation of a three a.m. wake-up and hike to the home of one of the Achuar families.  We were instructed to bring our dream and they would interpret them.

It rained all night long.. and I kept waking up, growing increasingly anxious about that hike through the jungle in the dark.  I told myself i was worried about Loretta (I was).  But i was just as worried about ME. 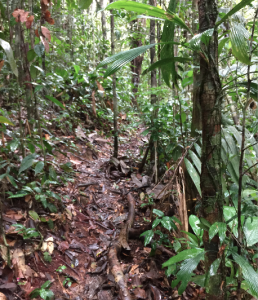 I decided that if I did not receive a dream, I would stay at our camp with her should she decide to stay. At three a.m., one of our campmates reported to Loretta that the guides were considering cancelling the trip because it was too treacherous.  As a result, Loretta decided to stay at camp.

I did not have a dream that night. So I stayed behind , my ego taking another hit.  At first, I felt disappointed… coming all this way and not joining the morning dream circle. But I got 3 more hours sleep and I told myself that I would get another chance when we visited with the Sapura people.

Those who decide to venture out that night came back with the report that it was not at all what they expected.  The dream interpretation was basic: It is going to rain today. Hunting will be good tomorrow.  Was this it? I guess I expected something more mystical and profound. Turns out, I did have expectations! It was time to let them go.

By the time we were with the Sapura people a few days later, I had let go of all “mystical dream interpretation” expectations. So when I presented my dream to the group,  I was ready to receive what Manari, the elder and shaman, had to say.  He said: “You see light because you are light.” That night I heard Pachamama:”you are here to appreciate beauty and to create beauty. Be open to what comes. You will know what to do”

The second gift:  Be open to what comes. We are light.  We are here to appreciate beauty and create beauty.

We will know what to do.