Lessons from Pachamama – The First Gift 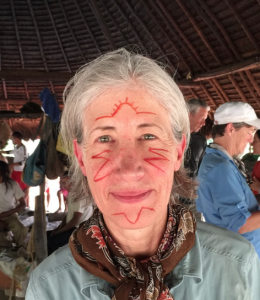 Once in Ecuador, after a couple days acclimating and exploring the city of Quito, we headed out by bus to the edge rainforest, arriving at the airport city of Shell where we were issued tall mud boots for our jungle adventure. Thanks to our guides and a talented bush pilot, we were deposited on a dirt airstrip in the middle of the Amazon rainforest. There, we gathered under a thatched roof and our faces were painted by one of the Achuar women. Once our entire group  arrived,  we set off into the jungle on foot led by our Achuar hosts.  As we slogged through on the muddy trail, the Achuar women nimbly jogged by us with our luggage on their backs and were quickly out of sight.

In the very first hour on the very first trail in the jungle, we came to a bog where we needed to make our way across via a series of narrow and slippery logs. I felt  confident, surefooted and agile in my new mud yellow boots, but I worried about Loretta who was less physically able than I.  So, I glanced back to see how she was doing. I could see that she was well cared for by Kuha, a young, strong Achuar man, but that glance cost me. I mis-planted my walking stick, shifted my weight a little too soon… 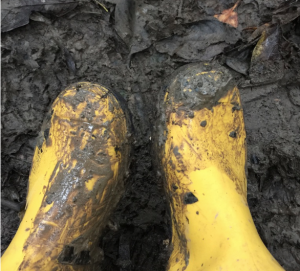 And PLOP! I slipped right off that log into thigh-deep muddy water.  I was rescued rather unceremoniously by Kuha. I scrambled up the far bank with now water-filled boots.

This was the first gift  of the jungle:  Pay Attention.  Be present. Take one step at a time.  My pickled feet sloshing in squishy boots were a constant reminder that day to watch my footing. From that point forward, for the duration of the journey, I was focused on where I was, where my walking stick was placed, where my feel were, and what was around me. I was the first (but not the last) in our group to tumble in the mud and learn the lesson of paying attention.